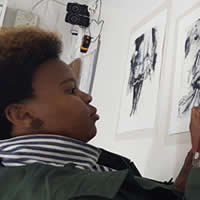 Nompumelelo Ngoma was born in Johannesburg in 1984, Soweto. She currently lives and works in Johannesburg. She studied Fine Art at the South West Gauteng College and finished an N4 course in 2004, she then went on to study a three-year course at Artist Proof Studio in 2008 and obtained a certificate in Printmaking. In 2009 obtained a NDip and honours degree from The University of Johannesburg, graduating with a distinction in painting.

Ngoma participated in a residency in Italy through a The South African Embassy in Rome (2013). She later served a residency programme in Knysna through SAFFCA (2017). Ngoma has received awards such as the Thami Mnyele Merit Award for painting and Cassirer Weltz Award through Bag Factory (2016) which have seen her hold her first solo exhibition at Circa, Johannesburg (2017). She has participated in numerous group exhibitions. 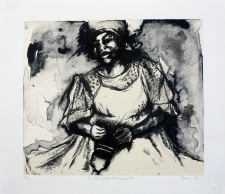 In my own elements I 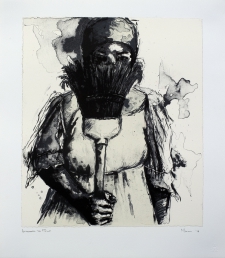 In my own elements II

In my own elements III